I think it was mentioned in chat a couple of times, but this is a pretty interesting language called HAL/S (High-order Assembly Language / Shuttle) that was used in the Space Shuttle program.

One statement can take up multiple lines (a^2 and b_i^2):

An example from one of the instruction manuals: 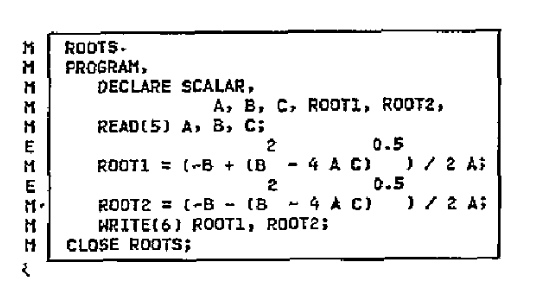 HAL/S (High-order Assembly Language/Shuttle) is a real-time aerospace programming language compiler and cross-compiler for avionics applications used by NASA and associated agencies (JPL, etc.). It has been used in many U.S. space projects since 1973 and its most significant use was in the Space Shuttle program (approximately 85% of the Shuttle software is coded in HAL/S). It was designed by Intermetrics in 1972 for NASA and delivered in 1973. HAL/S is written in XPL, a dialect of PL/I The thre...

There are some manuals here:

Sometimes I wonder how much of the code we write will someday end up in space. I think at some point we should chip in a little money into a pool and make it happen one way or another.

What, no discussion of Kubrick’s HAL and why it was named that?